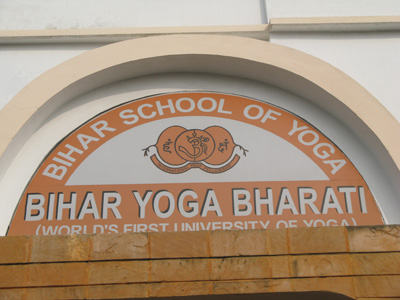 Without Saints & Rishis protecting the sanctity of yoga over thousands of years, the teachings would have indeed been diluted as they were handed down both orally & in written format. In this first article I’d like to dedicate my respects to inspirers who have made it possible for me (in following my own yogic path). However, as there are many various traditions within the multitude branches of yoga, one which inspires some may not be of the same encouragement to others, in this respect please accept my apologies. The Divine Life Society was established by Swami Sivananda after many years of austere practise (tapasya) by the banks of the Ganga in Rishikesh. It wasn’t his intention to found any form of organisation but due to requests by followers & his innate vision to society’s needs, he was driven to establish the Ashram in Rishikesh. Here he became known as ‘The Saint of Saints’, due to many of his disciples attaining the highest goal in life (moksha) & continuing to spread the message of their Guru’s (teacher) vision all over the world. The International Sivananda Yoga Vedanta tradition was established by Swami Vishnudevananda, as directed by his own teacher (Swami Sivananda). Currently Senior Disciples of Swami Vishnudevananda are directing the organisation since his departure in 1993. At the Sivananda Yoga Vedanta Centres they continue to impart wisdom to many thousands of students all over the world, by sharing their profound knowledge, inspirational teaching and guidance. Swami Premananda spent many years of service living with his teacher in Rishikesh (Swami Sivananda). He then relocated to Uttarkashi where amongst the Himalayas & forested foothills, he spent many years in isolation performing tapsaya. Due to encouragement from others including those at The Divine Life Society in Rishikesh, he gradually built the Anand Kutir, a Sivananda ashram of incredible beauty on the banks of the Ganga by Ganeshpur (Uttarkashi). Within the ashram grounds are lovingly tended gardens, a community hospital and a Gurukul environment for devotees and young men. Swami Satyananda established BSY (Bihar School of Yoga) & the Satyananda tradition, again under direct instruction by his teacher (Swami Sivananda). After many years, Swami Satyananda then decided to leave BSY & establish a place for his higher practices – Rikhiapeeth. Here he continued to live the life of a Paramahamsa as well as guide many disciples.

Currently the Satyananda tradition is being directed by two other Spiritual Masters; mainly Swami Niranjanananda at BSY, alongside Swami Satyasangananda (Satsangi) at Rikhiapeeth. Swami Niranjanananda joined his teacher at the age of four & has worked tirelessly ever since (both in India & overseas). He continues to oversee the development of BSY as well as establishing a training centre for those wishing to explore Sannyasa. Swami Satsangi left the world in her early twenties to serve her teacher ceaselessly. Since then she has established charities to help impoverished areas; furthermore elucidating ancient texts on the Tantras.

Swami Satyananda gave very specific and entirely distinctive roles for his two Disciples to follow since his departure in 2009; ensuring both the sanctity & evolution of Yoga beyond the 21st Century.

“ Those who teach the theory that a Guru is not necessary and that each one should follow one’s own reason and conscience, forget the ostensible fact that they themselves take on the role of Gurus to those whom they teach the doctrine. They begin to command respect, adoration & worship as great teachers, though they teach that there is no need for a teacher. “ – Swami Sivananda